Home » Who Needs To Be Sold For Manchester United To Rebuild Their Squad? 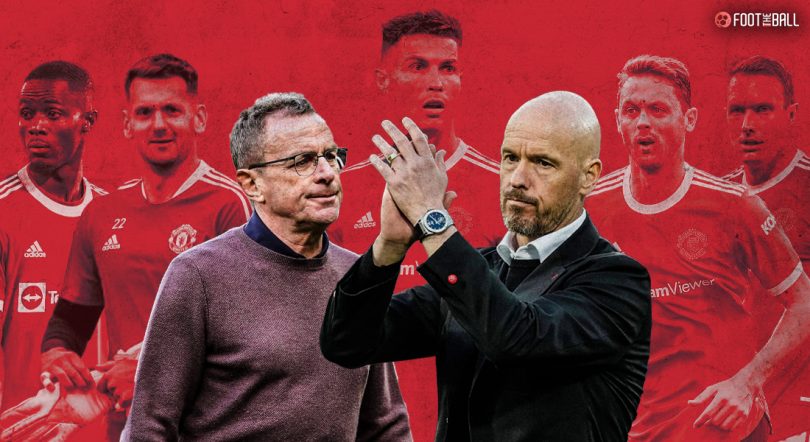 The fall of Manchester United has been very tragic over the past 10 years. This year their performances on the pitch have been very lackluster, essentially undoing all the progress they had made the previous season under Ole. Since the entry of Ralf Rangnick, it has become clear that this Manchester United team needs a radical overhaul and rebuilding under Erik ten Hag is the most logical option. To the extent that Rangnick himself went out to the press and stated that the team needed an “open-heart” operation!

This Manchester United team is the result of directionless thinking. Which led to complicated transfer decisions and a poorly organized squad. When the Red Devils take to the pitch at present, everyone’s willingness to fight for the ball is also evident which indicates disruptive leadership in the team. Their problems are in fact no different from the problems of Everton at the moment.

If Eric Ten Hag wants to revive the Red Devils, rebuilding the team will be the first step he will take at Manchester United. To rebuild Manchester United, Ten Hag will need a very large transfer fund for the summer. Some major earners have already refused to sign new contracts and will leave for free. But Ten Hag will still need to get rid of at least 4 other players to make sure they can build an effective team. Many Ajax players are already linked to Manchester United.

Fortunately or unfortunately for Teen Hag, the five players who are already there are on their way out. Lee Grant, Paul Pogba, Juan Mata, Jesse Lingard and Edinson Cavani are all out of touch in the summer. Among these five, Pogba and Lingard are two players that could have made Manhcester United a pretty penny in the market. But even freeing up money on the wage bill would be beneficial.

🚨 Paul Pogba is set to leave Man United as a free agent. Ralf Rangnick confirms: “As things stand, Pogba will not renew his contract with Manchester United.” 🔴 #MUFC

“It is likely that he will not be here anymore next season,” Rangnick added. Tweet embed pic.twitter.com/M8Y9yjSfQN

So here are the four players we’re with football I think Manchester United should move the whole team rebuilding under the leadership of Erik ten Hag.

Phil Jones joined the Red Devils in 2011, as one of the most promising English defenders of his generation. Unfortunately for the former Blackburn player, his career has been in dumps for the past eight years due to several injuries. Resulting in a great lack of trust and faith from the managers.

His career became a tragic side story as Manchester United’s downfall continued over the years. It’s time for him to move into this window because waiting for him to expire his contract would be a complete waste of money for United.

If the record-breaking English champions are able to snag close to £8m for the former wonder child, they should jump at the chance and take advantage of it. We all hope Phil Jones can revive his career somewhat so he doesn’t retire to the physical therapy table.

23.96% – In the last two seasons, Eric Bailly played just 1,639 minutes of the Premier League which is less than a quarter of the total.

On average his playing equates to 9 matches out of just 38.

Do you think he’s reliable enough to be in the club? pic.twitter.com/s97ONaZpxQ

Without a good run of games every season, Eric Bailly’s confidence has slipped off a cliff and United must seek to cut their losses before they end up pushing the defender until 2024 while watching matches from the sidelines. Fortunately, he still has some value in the transfer market and could cost suitors close to £12m.

Nemanja Matic was a decent servant for Manchester United. In fact, he is perhaps the only actual defensive midfielder the Red Devils have signed since Ferguson’s departure to have had a hit. Now that the Serb was 33 years old, his forces were depleting at a sharp rate. It is not as dynamic as it used to be. Manchester United desperately needs a full review of their midfield positions. They need to get at least two new midfielders so that Erik ten Hag can put together a cohesive squad.

“He brought me to Chelsea from Benfica and now when I decided to come to Manchester it was a reason to come.”

Thiago Pinto brought him to Rome as soon as possible ⏳

Roma need some depth and experience in midfield. pic.twitter.com/16QWlbIuYH

Although Matic will not be missed at Old Trafford, Premier League fans who saw him in his prime in a Chelsea shirt will miss him. He would be a good addition to any Serie A team looking to find depth in defensive midfield positions. He is also already linked to Mourinho’s Roma.

When Cristiano Ronaldo returned to Manchester United in the summer of 2021, the majority of fans and pundits expected that United would compete for titles. But the return of the prodigal could not be more wrong. At 37, he can’t be someone you can build a club around for the next 5-6 years. Although he has been United’s savior on many occasions throughout the season. In fact, he leads the scoring chart for the Red Devils this season with 16 goals.

So you might think we’re crazy when you suggest United sell the greatest player of all time. But are we really?

CR7’s off-field impact has been called into questions this season, and rightfully so. His comments against the coach and his own and club expectations in the media have fueled the soap opera currently sweeping Old Trafford.

On the pitch, there is also a clear increase in reliance on him, something Juve are still struggling to recover from. Should United decide to stick with Ronaldo, we can see that the bed of Ten Hag in this period would be a suitable struggle. The CR7 also doesn’t fit the Ten Hag properly, which definitely causes more friction down the line.

Ronaldo must now search for his final salary as his fame suffices to hide his deteriorating ability. Next stop MLS or PSG, perhaps?

Freeing Ronaldo’s salary and the additional £20m he could derive from the Portuguese’s sale will certainly help Tin Hag rebuild this Manchester United squad.